Conversing with kids about consent

In late 2017 the #MeToo movement made consent a household word. In early 2020 the trial of Harvey Weinstein has ignited more debate around consent, coercion and communication. Here Dr Elsie Whittington of the Manchester Centre For Youth Studies talks to Outspoken about how, when and what to say to children about consent…

I’ve always been interested in sex education. In my early 20s, I drove a van around rural neighbourhoods giving out condoms and talking with young people about sexual health for the local youth service. When I did my PhD – Understanding Sexual Consent – at the University of Sussex, I was working with 13- to 25-year-olds, and because I wasn’t that much older than them, it seemed we could relate to each other’s experiences and concerns. Our reference points were similar, such as dating, flirting and having a sexual life with access to the internet, digital media and smartphones.

Since then, in my research I’ve found that young people are able to give simple and clear ideas about sexual consent but are unsure about how to put this into practice. They are often excited and enlivened by real-life scenarios where we consider different ways of asking for consent, how to figure out what they want, being with their feelings, saying no – and how to go off script.

They’re keen on knowing how to navigate the grey areas of consent and awkwardness. The realities of “just asking” someone if they want to do something sexual are complicated and shrouded in societal and cultural practices of silence and awkwardness. Young people have said things like: “I want consent, but I’m too scared to ask for it” and “It’s really hard to actually upfront ask someone if they want to do specific things with them. It might be a really massive impact on your self-esteem.” They had worries about “ruining the moment” and seeming like “you don’t know what you’re doing”.

Communication, even if it’s awkward to begin with, is likely to lead to more pleasurable experiences. But it’s still hard to live a fully consensual life. I tell young people: “With partners I get it wrong sometimes. I don’t always ask: ‘Would you like this?’ and I’m not always explicit, but I try to be and am getting better.” It’s good to acknowledge that it’s difficult but you’re trying.

Students express the importance of mutual consent – even if they don’t use that term – and they agree that it’s vital to work with younger children on consent.

WHEN TO START THE CONSENT CONVERSATION

Even without it being labelled as consent, we learn about consent in our family. Do you ask your child for a hug or just give them a cuddle? There’s a balance, and you want to develop an intuitive relationship where sometimes you know they need your support, sometimes you ask them first.

There are different cultural approaches and levels of when and how you show physical affection in a family, or whether you argue or quietly go off and huff about it. These things make a difference as to how we learn to establish boundaries and communicate desires of what we do and don’t want.

Parents have an absolutely key role in educating their children. Informally we’re always teaching them about consent – it just gets applied in different contexts as they get older.

You need to scaffold conversations about consent – that means building yourself up to have good conversations, even if it feels awkward or risky. First make it clear to your child that it’s OK to talk openly, and secondly: do a bit of work so you develop a vocabulary for talking about consent.

Parents should totally talk to children as young as 2 and 3 about consent – and make it quite real. Show consent by teaching your child about sharing toys or asking to play with someone. Model consent by asking your child what they’d like and pointing that out you’re creating space for them to make a choice: “I’m asking what you’d like for dinner so you can think about it and say: ‘I don’t want this but I do want that.’” At bathtime ask: “Would you like me to take your clothes off or do you want to do it yourself?”

For older children you have to use words like boundaries, power, desire, pleasure. Be ready to talk about being uncomfortable. The goal is for them to be able to articulate what they want to explore and for them to feel that it’s OK and safe to ask questions like: “If I want to have sex with someone, how do I communicate that? What if I feel uncomfortable?”

I’ve worked with hundreds of young people, and when I ask: “What does consent mean or mean to you?” they consistently give short, clear answers: “Asking for permission”, “getting a yes or no”, “both of you want to do it”. Being abstract and defining it is really simple. But when you push it, unpack it and ask them how they might do this in real life, they don’t know. Often they don’t actually ask: “Do you want to have sex with me?”

We’re not used to being straightforward about asking and replying to things. We bring up children to be polite and to say: “Dinner was delicious; sorry I wasn’t able to eat all the carrots” instead of: “I didn’t like the carrots.”

From a young age, kids are encouraged to avoid making situations embarrassing and to please people in more powerful positions. If we do say no, we are encouraged to say “No thank you” nicely, smile sweetly and often provide a reason for the “no” so the person doesn’t feel upset or rejected. And people fear rejection in romantic and sexual situations.

There’s great research showing that even in everyday situations that aren’t sexual it’s hard – if you don’t want to see someone, it’s easier to say “Sorry I’m busy” than “I don’t want to see you.” It’s rare in middle-class British society for people to say an outright “no” to anything.

As I wrote in my piece about #MeToo, we need to learn that although saying no can be awkward and uncomfortable, it can be constructive too. We need to cultivate defiance.

Children, teenagers and adults all understand and experience consent differently.

Young people are dismissed as not being competent enough to make decisions for themselves. They have relatively less power in lots of spaces – especially in school.

Schools aren’t really set up as organisations that model good consent. It’s more zero tolerance: students have to ask to go to the toilet or sometimes to take their jumper off, which forces the idea that they don’t have power even over their own body heat. Children are taught to sit still and be silent; girls are encouraged to not take up space, make noise or counter people in power. Even if you teach them that “yes means yes and no means no”, kids end up learning that saying no to a teacher or parent sometimes means they’ll get in trouble and probably be made to do it anyway.

In sex-education lessons, young people want to know not just how to put on a condom but how you get to the point of putting it on, how you have fun and pleasure when it’s in use.

When you talk about consent, you’re also talking about pleasure, because for consent you need to know what you want and don’t want.

We’re just not practised in talking about pleasure. Commonly young people don’t know how to talk about it – sometimes you have to do it almost by stealth. A lot of pleasure is about trust and feeling safe enough with someone to be able to play and explore. So conversation about pleasure is sometimes happening without people necessarily using that word. 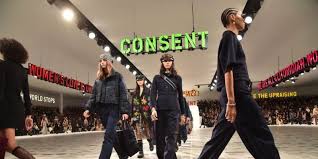 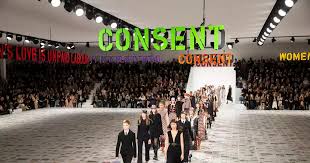 WORDS TO USE ABOUT CONSENT

I like to talk about ongoing consent, or that it’s a process and that it’s about communication. I talk about negotiation a lot, because it’s a word that helps you to recognise power and the fact that people bring different wants into a situation. You have to be clear about what those wants are, see what’s the same and what’s different, then figure out what you might want to do. It’s also important to know that if you need to withdraw consent, it will get heard.

We’re in a shift at the moment where asking for consent, and saying yes or no explicitly, feels like a vulnerable thing to do. But we need to encourage young people to shift towards that and pay attention to each other’s signals and bodies.

With someone’s non-verbal cues, it’s essential to be aware of them and not to disregard them. Research shows that someone doesn’t have to say no to have their refusal be understood verbally or physically. With longer-standing partners you might know how to read some of their signals – but even then, don’t take that for granted. It’s important to encourage young people to check in with the other person, be open and communicate verbally, because you don’t always get it right.

Many young people, and adults for that matter, say that you can give consent without words. But we have to combat a culture of assumptions that are based on scripts: “If someone likes me they’re going to do X, Y or Z” or: “I’ll interpret that behaviour as affirmative about something we haven’t even spoken about yet…” or: “If a woman goes to a man’s room, it means she wants to have sex.”

Having a consent continuum – a spectrum – counters messages around “yes and no”, “black and white”. Young people have highlighted that black-and-white conversations and messages feel boring, distant and sometimes not worth engaging with. They want to think about the grey areas of a relationship – about what would move it down the spectrum towards coercion, sexual violence and rape – and about what would move it up to make it more positive and pleasurable.

Consent is all about bodies, boundaries, pleasure. I am advocating talking about the grey areas and awkwardness.

Dr Elsie Whittington is a lecturer in criminology and sociology at Manchester Metropolitan University and a core member of the Centre for Youth Studies. She also teaches an undergraduate course about rethinking consent. Read her pieces on consent: The Impact Weinstein And #MeToo Must Have For Younger Generations and Talking about sex is awkward, so how can teenagers “just ask” for consent?

Not a pretty picture – young people and body image